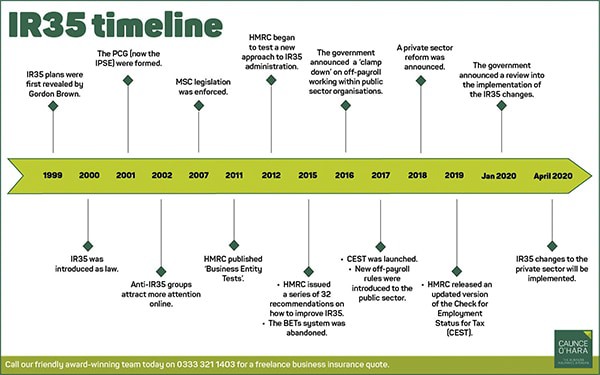 IR35 legislation has been in effect for the last 20 years. Over that time, there’s been a number of adjustments, consultations and turns in the road that have led up to the changes that freelancers and contractors are preparing for today.

Read our timeline to understand the history of IR35 and how it has developed in the lead up to the April 6th 2020 private sector changes.

IR35 plans were first revealed by Gordon Brown who was at the time Chancellor of the Exchequer. Brown issued his IR35 plans in response to tax and National Insurance avoidance. The term itself was coined from the press release reference – Inland Revenue 35.

IR35 was enforced and introduced as law after being implemented in the Finance Act for 2000. Initially, up until 2017, intermediaries such as personal service companies providing the worker’s services were responsible for determining the worker’s tax status.

PCG (IPSE), a British not-for-profit organisation for professional and self-employed individuals established in 1999 sought permission for a judicial review of IR35. PCG wanted IR35 to be abolished completely. The PCG lost its appeal at the end of 2001 when the high court ruled in favour of the Inland Revenue.

Anti-IR35 groups, such as PCG, attract more attention online as they move their focus onto case law. The first IR35 case ‘Lime IT vs Justin’ was won by a contractor.

Managed Service Company, (MSC) legislation was enforced to remove the potential tax advantage offered by using MSC schemes that were believed to be used in an attempt to escape paying tax and NI.

HMRC published ‘Business Entity Tests’ accompanied with a selection of standard IR35 scenarios on its website. Business Entity Tests (BETs) were designed to help contractors understand the likelihood of HM Revenue and Customs considering their contracts and day to day routines as falling inside or outside of IR35.

HMRC began to test a new approach to IR35 administration, following feedback from the IR35 Forum.

HMRC issued a series of 32 recommendations on how to improve IR35, following a review of input provided by IR35 forums. HMRC acknowledged that IR35 was ineffective and claimed that non-compliance with the legislation was widespread.

After being reviewed by the IR35 forum the BETs system was found to be ineffective for customers. The forum reported that it was being used very little and not fulfilling its intended purpose. Following this, the tests were abandoned.

The government announced there would be a ‘clamp down’ on off-payroll working within public sector organisations.

The draft legislation ‘off-payroll working in the public sector: reform of the intermediaries legislation’, was published by the HMRC explaining how IR35 would be applied to public sector bodies in April 2017.

A new IR35 employment status test, Check for Employment Status for Tax (CEST) was launched in early March 2017 to help workers, clients and agents determine whether a worker falls inside or outside of IR35.

New off-payroll rules were implemented in April 2017 for contractors working for public sector organisations. Instead of contractors themselves being responsible for determining their IR35 status, this obligation has been handed to the employer of each contractor, i.e. the client. Where a contractor is considered to be inside IR35, the fee-payer must deduct employees’ NICs and income tax from the contractor’s pay, as well as paying employers’ NICs.

A private sector reform was announced.

The government launched a consultation on the implementation of the off-payroll working rules reform which ran until 28 May 2019.

HMRC released an updated version of the Check for Employment Status for Tax (CEST).

The government announced a review into the implementation of the IR35 changes.

Private Sector IR35 postponed a year, until April 2021, due to Coronavirus Pandemic. 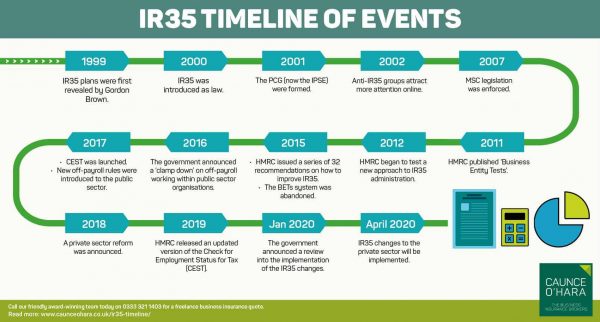